More Sculpting in the Lab… Intermediate 130403

Progress #1: Vertex Stitching is a Pain

So far, after drawing out carefully what the feel and look of my final design would be, I have taken my time keeping my model low resolution and worrying more about the form itself, as well as proportion.  With a good underlying, low-res geometric form, sculpting in the higher resolution details will be more effective.
I made an alternative design decision that instead of modeling the mantis as separate components that I would rig for posing, I will instead model a continuous form since rigging the model with bones will deform the mesh in a cleaner, more realistic fashion than using ball-joints that I would mold to the pose like I originally thought I would do.  Hence the title of this post.  I’ve been vertex stitching my disparate pieces so I can create a continuous form….it may not look like much now, but experience has shown me that attention paid to the low-res form in the beginning will lead to effective rigging.  Bones that deform a mesh use areas of influence to pull vertices around, given user-set tolerances, or “weights.”  However, bones can, when pulled in certain ways during the posing stage can lead to very odd deformations if the underlying mesh isn’t correct, so I’m being very careful so I save myself a great deal of agony later when it will be a bad idea to edit the mesh once it is rigged…. 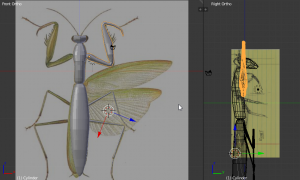 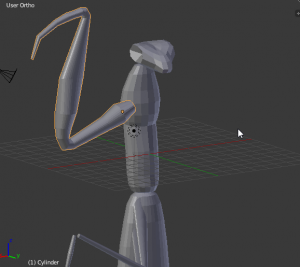 Note that the raptorial legs and back legs are not in their final rest pose.  I will flatten them out once vertex stitching is done.