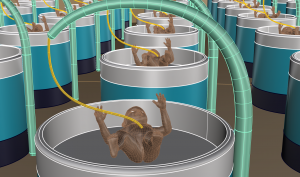 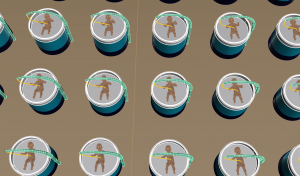 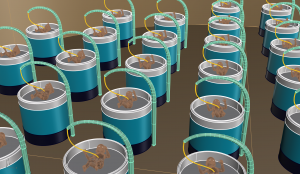 Using Makehuman, Blender, and T-Splines to work with a human form

How to create custom materials in Keyshot

How to create a fluid simulation in Blender

Working with blank pixels in Keyshot

How to create a rigid body physics simulation

The idea that humans’ relationship with technology has fundamentally changed the nature of our existence, to the extent that we are becoming a new species.

Some quick examples of the profound impact technology has had on human existence:

1) As a result of biomedical advances, we are facing the possibility of a future in which our humanity itself will be altered beyond recognition (Francis Fukuyama).  Artist Patricia Piccinini often uses her work to address concerns about biotechnology, such as gene therapy and ongoing research to map the human genome.

2) The notion of achieving immortality by “mind uploading” is a self indulgent power fantasy that shows contempt for the flesh. (Mary Midgley)

Ray Kurzweil writes about the advance of technology, the limits of biology, and the future of the human species.  He hopes to stay alive long enough to digitize his consciousness.

3) Now that we have sequenced the genome, humans ARE data.

4) The emergence of big data and new methods of spying and surveillance have created a world in which privacy is no longer possible.

5) It would be morally wrong for humans to tamper with fundamental aspects of themselves (or their children) in an attempt to overcome universal human limitations, such as vulnerability to aging, maximum life span, and biological constraints on physical and cognitive ability. Human lives would no longer seem meaningful in a world where such limitations could be overcome technologically (Bill McKibben)   The movie Gattaca addresses some of the potential consequences of such tampering.  Here’s a link to the trailer.

6) Bill McKibben suggests that emerging human enhancement technologies would be disproportionately available to those with greater financial resources, thereby exacerbating the gap between rich and poor and creating a “genetic divide”.

7) According to the artist STELARC, “Bodies are both zombies and cyborgs. We have never had a mind of our own and we often perform involuntarily conditioned and externally prompted. Ever since we first evolved as hominids and developed bipedal locomotion, two limbs became manipulators and we constructed artifacts, instruments, and machines.  In other words we have always been coupled with technology. We have always been prosthetic bodies. We fear the involuntary and we are becoming increasingly automated and extended. But we fear what we have always been and what we have already become — zombies and cyborgs.”

STELARC‘s quote from above is poignantly expressed in his “ping body” and “amplified body” projects.

8) Biopolitical activist Jeremy Rifkin and biologist Stuart Newman accept that biotechnology has the power to make profound changes in organismal identity. In the extreme, this could lead to the manufacturing and enslavement of “monsters” such as human clones, human-animal chimeras or bioroids, but even lesser dislocations of humans and non-humans from social and ecological systems are seen as problematic. The film Blade Runner (1982), the novels The Boys From Brazil (1978) and The Island of Dr. Moreau (1896) depict elements of such scenarios

9) Joy’s 2000 essay “Why the future doesn’t need us” argues that human beings would likely guarantee their own extinction by developing the technologies favored by transhumanists. It invokes, for example, the “grey goo scenario” where out-of-control self-replicating nanorobots could consume entire ecosystems

10) The proliferation of social media has fundamentally changed the way we relate to others. We are now more interconnected than ever before, and paradoxically, more isolated.

11) Technology can enable one to be an architect of their own identity.

Henrich – The Weirdest People in the World

Thacker-Biotechnology and the Discourse of the Posthuman

By the start of class on Tuesday March 31st, students should post the following on the public class website:

• The thesis statement about the posthuman that you’ll explore in your project. (1-3 carefully written, descriptive sentences)

• Evidence of additional research. Watch a video or movie, read an article, examine some resources on the web, and then write a brief description of what you learned.

In addition, please create some sketches of what you plan to create. Students are not required to post their sketches on the web if they prefer to submit them in hard copy form at the end of the semester.

By the start of class on Thursday, 4/16 each student should: