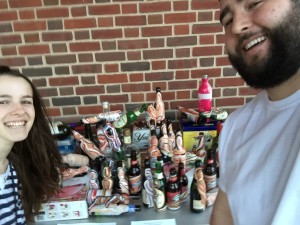 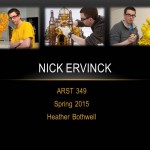 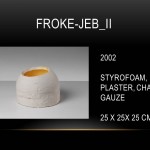 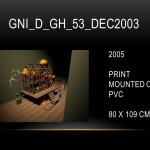 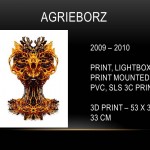 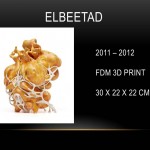 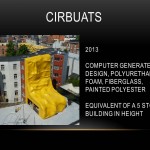 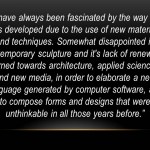 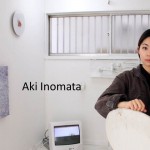 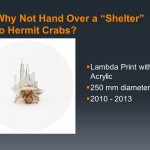 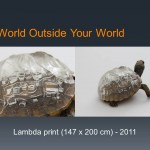 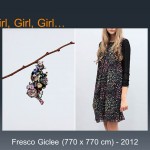 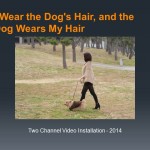 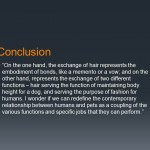 Blyn means that the lines between technology and humanity are being crossed when discussing the posthuman era. Signs that point to this are technologies that are helping humans live longer such as pacemakers, prosthetics and artificial organs. Including I believe Mullins is able to be her own architect for her identity because of technology. She can choose whatever types of legs that she pleases. She has beautiful glass legs to show a loving, caring or pure side of her personality. However, her cheetah legs show a fierce side that is aggressive and limitless. Technology gives her a way to define her legs, which in turn changes her identity. It is something that makes her stronger rather than fixing a problem. I don’t see the posthuman era being defined by corporations, but I do think that it is defined by ideological mechanization. There would be no need to try and perfect unless that is what you want. Society wants the ideal human, a human which is being turned into a perfect machine. However, I think that individuals or small groups of individuals can contribute to this and it is not all about large corporations. I think that humans, if using the technology correctly, will benefit from a net gain from augmenting their bodies. It cannot be abused because we are humans and we are not meant to live forever or be perfect. It is great to have the perfect solution to a problem, but there is no reason to go overboard. There will need to be some type of regulation.

I thought this was the weirdest thing I have ever seen. There was a guy climbing to different levels. At different times, the levels had different amounts of chaos. It was a fascinatingly confusing video. The main character looks like he is dressed in pink Scottish kilt. I have no idea what that means or where that came from, but it did appear to be hindering him throughout the video when he began to scale the walls and such. I was also really confused by the gelatin type liquid that was flowing down the small slide.

There were multiple characters in this piece. There were sheep ladies, a man in a pink Scottish kilt, a woman with glass legs, a tiger lady, to bands having a concert with a huge mosh pit and an old man that appeared to be destroying and building something at the same time. The old man was throwing what looked like lard at a wall to stop a leak, but it looked like he was trying to break the lard. The main character (man in a pink Scottish kilt) got attacked by the tiger lady. The main character was climbing to different floors and each of the other characters was waiting for him on those floors.

The artist definitely chose this type of presentation for a reason, but I have no idea what the reasoning was. The music was ridiculous throughout the entire video. It would change tune depending on which floor the video was looking at. It was fascinating, disturbing and distracting all at the same time. I was so confused. I do think that it was shot in a tall building with multiple floors for a reason. It gave a felling that the main character was climbing to a goal.

The Work in the World

This has no place in the world. It does not relate to anything for me. It does not fit anywhere except for in the world of crazy and weird movies. It was so abstract that I can’t understand its fit in this universe. Maybe in fits in some alternate universe, but not here. If I was forced to give an answer of where it fits, it could possibly fit in with some motivational speakers talk. It could mean climbing up through various goals. It would be also about learning that there are going to be obstacles and it will take all of your strength to get through them.

The Story it Tells

It tells a story of a weirdly dressed Scottish man with a bloody face climbing through various floors of a building. He goes through various challenges at each level, and he need to conquer them to save everyone from the top floor man. However, I am not sure how the man at the top was causing any of problems. Anyway, this main character goes through all of these challenges, and it all culminates with him killing the tiger lady. He conquered all of his goals and it saved the day. I am not sure what he saved the day from, but he looked relieved. 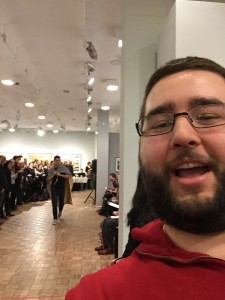 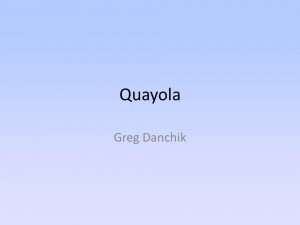 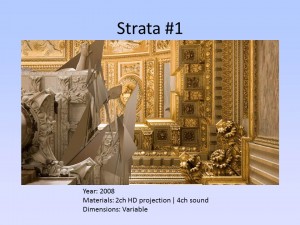 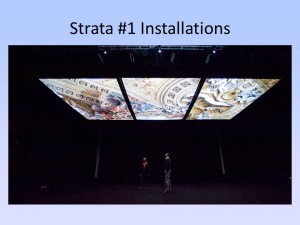 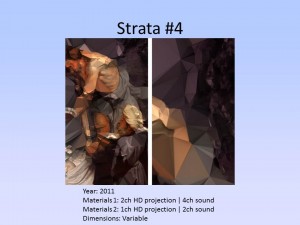 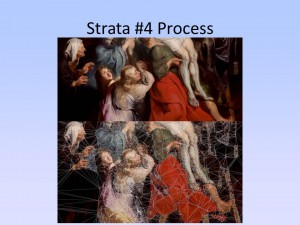 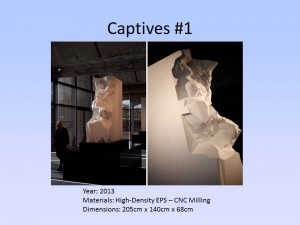 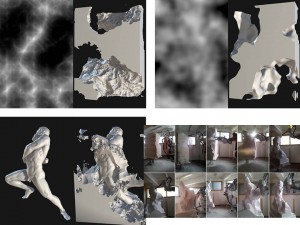 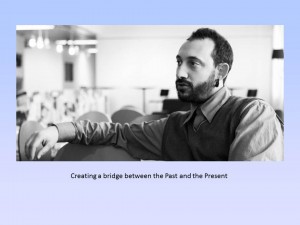 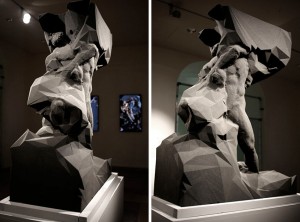 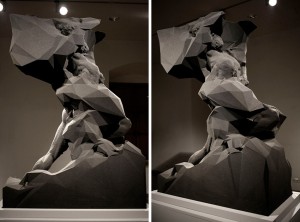 The first thing that this piece reminds of the idea that every sculpture starts with a single piece of marble. It is almost like the beautiful piece of art is trapped within the giant slab of marble. It also is pretty incredible how it looks like it was a handmade piece of art even though it is 3D printed. The man also looks like he extremely powerful. Considering the title, it looks like he is trying to break through the rock, where he was a captive. I also think the artist clearly defines the difference human and marble/rock/sand through straight and smooth lines. The human looks more refined and smooth, while the other parts are jagged.

This sculpture looks like a human trapped within a rock. The rock is jagged. The human looks locked into the rock with his feet, right thigh, and his head. His head is mostly trapped in the rock, but the chin, which is bearded, appears to be escaping from the rock. The human’s arms are situated in such a way that it looks like he is trying to rip the rock off of his legs. The human is also extremely muscular with a well defined core and arms.

I believe the artist chose to print this with sand for a reason. The sand gives off the same color as marble so it looks like a real sculpture. Also, sand is really small so it can be make define everything as precisely as possible. I also think that sand is a great material to print with because you could print this digitally created sculpture at any size. This is roughly 6 feet tall, but it could have been printed at 6 inches tall. I also believe that the artist chose to define the human muscular nature to show that he is powerful and trying to break free from the rock.

The Work in the World

This artwork reminds me of other sculptures that look like they are almost left unfinished on purpose. This work almost looks like it was never finished, but it looks finished at the same time. It is an interpretation of Michealangelo’s unfinished series of sculptures, “Prigioni”. It also reminds me of oppression. It looks like someone trying to escape from something holding them back. It also looks like someone being created into something new. It could be a reminder of a new creation.

The Story It Tells

Considering the title, I believe this is a sculpture of someone trying to escape their past. I believe the person is being born into someone new. It looks like the rocks are the human’s old self, and the human is breaking away or trying to become something new. Someone else may interpret this work as someone being created. It looks like someone is growing from the rock. They are being created slowly, but perfectly. It could also look like something from man being born from nature. It is like taking something that is not perfectly formed and making it perfect.

Is having too many degrees on ever a problem?

Are there ever times you should not use surface blend?

How do you Extrude with Gumball? 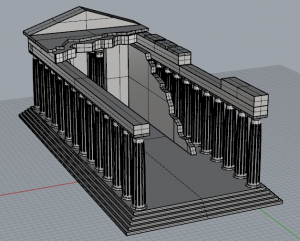 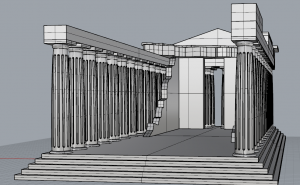 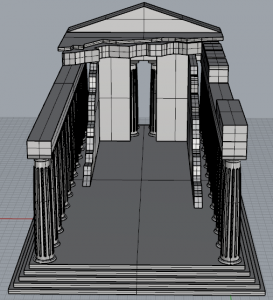 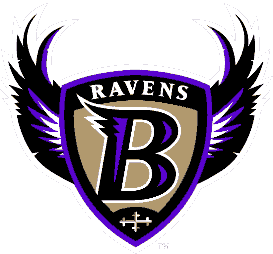 Please list a few of your interests, sports you play, or other activities you’re involved in (on or off campus).

Why are you taking this class? What do you most want to get out of it?

Are there any particular topics or techniques that you’re hoping to learn about in this class?