I am choosing to borrow the strategies of focusing on a dramatic pose found in comic books. I am also taking visual and philosophic inspiration from the comic book characters Two-Face (from Batman) and Venom (from Spiderman).

The visual of image of the face split down the middle with two very contrasting visages is one I will incorporate into my project. Some visual elements from Venom have also inspired my character as well.

Philosophically, Two-Face represents someone who attempts to justify evil actions that serve what he believes is a greater good, blinding himself to the evil of his own actions in the process. Venom represents the idea that an individual’s worst and most terrifying enemy is often himself, and resonates the concept of misusing newfound power. 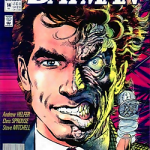 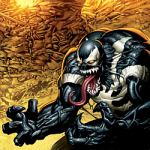