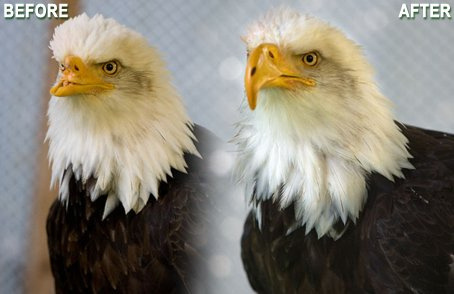 Sometime in 2005, Beauty the bald eagle was shot in the face by a poacher, which damaged her beak badly enough that she couldn’t eat on her own. Animal rescue workers found her before she starved to death, and volunteers at the nonprofit group Birds of Prey Northwest nursed her back to health via tube-feeding and, later, hand-feeding with forceps. But it became increasingly clear that her beak was never going to grow back — meaning that Beauty would never be able to feed herself. She was on track to be euthanized.

But raptor specialist Jane Fink Cantwell, who dresses like Indiana Jones, refused to take “dead bald eagle” for an answer. She joined forces with mechanical engineer Nate Calvin of Kinetic Engineering Group, and together with other scientists, engineers, and even a dentist, they designed a nylon polymer beak that would perfectly replace Beauty’s lost upper mandible.

Calvin developed the new beak using a 3-D modeling program, then used a 3-D printer to fabricate it. After an arduous procedure to attach her prosthetic, Beauty was able to eat, drink, and preen herself on her own.

Beauty’s new beak isn’t secure enough for her to return to the wild, so Cantwell is still caring for her. But she’s a lot more self-sufficient than she was — and her case may help pave the way for making better prosthetics for wildlife in the future.

I’ve seen so many bald eagles crying a single tear over terrorism or gay marriage or whatever that it’s really hard not to interpret this as some kind of metaphor about America. Ruined by guns, kept alive by nonprofits, technology comes to the rescue? Sure, I think it works.