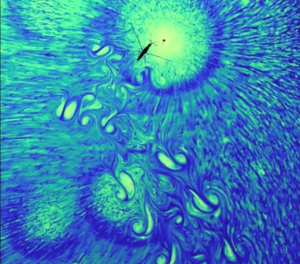 The water strider is an insect that is noted for its ability to “walk on water”. Often referred to as the “Jesus bug” or “pond skater”, it is among only a few types of insects that can do this trick. Their specially evolved bodies not only allow them to float, but also bounce on the water, travel very quickly across the surface, and support up to fifteen times the weight of the bug. Each of their legs has thousands of microscopic hairs that trap air and create buoyancy. This air cushion allows them to balance and propel forward using surface tension.

The body is a about one centimeter long and their two, back long legs are the ones that help them stand on the water. Their shorter front legs are designated for catching prey. Mechanical engineer, David Hu at Georgia Tech did a study with food coloring to prove that water striders do not really stride, but row through the water. They “generate a vortex with each stroke”, deforming the “film-like” surface of the water and using it to move forward. They also only weigh a couple of grams, so their legs are the right length to keep them afloat. Hu calculated that if humans were to build shoes that have the same capabilities (as Da Vinci once sketched in his notebook) they would have to be a kilometer in diameter.

The water strider is fascinating to me because its overall appearance does not imply that it is a unique specimen. It does not have unusual coloring, an oddly shaped body, large wings, or specially evolved eyes. The beauty of this insect comes from its movement, which will make it fun to model and imagine in a dynamic setting. I look forward to working on this project.